The A.P. and Informed Sources

Reading Friday’s NY Times article: A.P. Cracks Down on Unpaid Use of Articles on Web, made me laugh. In the era of Twitter and the age of instant messaging, the Associated Press says it’s in the business of selling headlines and has a right to license their every use in any context including—especially including—search engines such as: Google, Yahoo and Bing. Unquoted in the NY Times article is any mention of what this 1,400 member, non-profit association does best: aggregating and editing news sourced by a global network of reporters and editors.

In the 1980s, when I worked at the CBS News Election and Survey Unit, there was an A.P. ticker near my desk. At the time, the A.P. had the contract to collect election results from their county reporting points, summarize those results and provide them by teletype to members and subscribers. Most of the time, however, it carried the feed of breaking news and followup stories. Postings were not signed, they just had an originating station but, after watching for a while, the personalities of different stations around the World emerged. Mistakes were common and pranks were occasionally pulled. In today’s parlance, this was a very successful social media network with many of the characteristics found in today’s Internet mix of chatting, tweeting and blogging. It just wasn’t free and it wasn’t open. It was built on expensive phone lines leased from Ma Bell and you had to be an accredited member to post stories. 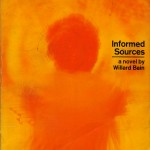 The A.P. has a great heritage that goes back many decades before my encounter at CBS. I have a novel that I bought at The Strand Bookstore on my first visit there upon moving to NYC after collage:  Informed Sources (Day East Received) by Willard S. Bain. The novel is a visual work in teletype-ese, printed in an ALL-CAPS typewriter font. Written in 1967, it was given away for free in mimeograph format by The Communication Company, an underground press, before being published by Doubleday and Company in this softcover edition that I’ll have to stop reading soon if I want to finish this post.

Informed Sources tells the story of a terrorist plot coinciding with the reported death of a pop culture idol from the perspective of the station staffers at Informed Sources (IS), an A.P. like network:

Except that this is 1967 and everyone is more or less stoned. Yet, here too, you can hear voices like those of today’s Internet. Take this quote from the beginning:

The more thing change… Right? The novel remains an unknown classic of the underground literary world at that time when the beat poets were experimenting with LSD and cultural revolution. It’s not on-line, as far as I know. There are only four used copies of the softbound edition for sale on Amazon and only one of the mimeograph copies.

Sorry, but I don’t wish the A.P. well in their headline selling business. Not if it means a full court press against fair-use under copyright that will saddle the Internet with last century’s digital rights concepts. There is a big difference between atoms and bits and the bits of information that seach engines gather and maintain about other online content (links) is not that content — it is the conversation about that content. The A.P. did social media right for so many years but now they don’t seem to get it at all. Paid headlines, like paid speech must eventually lose market share to free variety.